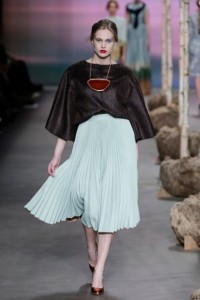 we delivered the music for the mattijs fall winter 2014 catwalk show, called ‘complementair’. it was the official opening show for mercedes-benz fashion week amsterdam.
the collection was inspired by the work and life of vincent van gogh, using colors and prints from his paintings. mattijs was supported by the van gogh museum. the mix is online.

walk-in music was a blend of french melancholic accordion tunes with the sound of light rain. sometimes a few screeching crows could be heard, just small snippets, like the crows in vincent’s paintings.
the show was introduced by jolanda van den berg, a dutch actress and singer, and the long-time muse of designer mattijs. she sang an acapella version of don mclean’s ‘starry starry night (vincent)’. we do not have a recording of her performance, but imagine a true gentle and beautiful voice singing this classic song and start the listen to the mix, where you can hear jolanda’s voice whispering the lyrics.
the soundtrack consisted of music made by the willem breuker kollektief, composed for movies by director johan van der keuken. the main theme was breuker’s ‘waddenzeesuite’ also named ‘suite for the shallows’. the mix is an ode to dutch artists, and set a melancholic atmosphere which turned a little crazy at the end. the finale was full of energy, and again by willem breuker.
you can see the full collection on team peter stigter’s website.