We did the sound score for Matan, a new and young Dutch designer duo, who had the honour of opening Mercedes Benz Fashion Week Amsterdam. It was their debut show and the stakes were high.

It was all about a fresh and eclectic approach to fashion, mixing colours, patterns and materials in a way we had never seen before. The Baha’i temples in India inspired the collection: a mash-up of religion and beliefs, spiced up with spiritualty and the supernatural. Designers Luuk Kuif and Diek Pothoven were also influenced by mysterious nineties style movies and tv-series, such as Donnie Darko, the X-files, Charmed and Stranger Things.

We composed the intro ourselves. During that first minute a huge cloth made out of parachute material started to come alive with the aid of wind and smoke machines. The cloth flew horizontally and slowly rose above the catwalk, which made it look like a mysterious cloud or stormy waves.
During the sound score we used music and samples from Soft Moon, Buddhist monks, Stranger Things, taiko drums from Japan, The Verve, singing bowls, the voice from an obscure brain function video and the beats from Ultravox.

The seating and walk-out sound design consisted of samples from tracks by Vangelis and Jean-Michel Jarre.

Martan is not yet to be found online. Might they be as mysterious in the virtual world as in real life? Did that show ever happen? Or did it take place in a parallel universe? 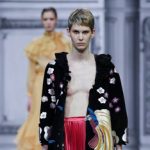 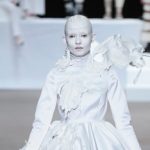