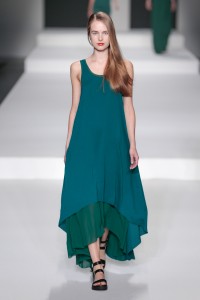 we delivered the music for danish designer claes iversen’s spring summer 2015 show. it was the official opening of this season’s mercedes benz fashion week amsterdam.
claes mixed his breath taking couture pieces with prêt-à-porter looks. the latter being a first time ever, resulting in great skinny trousers and t-shirts with fantastic prints and embellishments.
his instructions towards to music were clear and vague at the same time: it had to be classy, emotional, positive, reminiscent italian haute couture shows from the nineties ànd it had to have a austere and clean cut scandinavian feel. his collection was mainly inspired by architecture: building pieces and the art of folding, which claes combined with the luscious magic of rhinestone brooches.
we decided to do a mix which had to feel like an endless repetition of elements, starting minimalistic building towards grandeur, taking it all back again, and repeating the same structure over and over.
we used two songs by danish artists mø: ‘pilgrim’ and ‘dust is gone’, plus m.i.a’s ‘sexodus’ and ‘exodus’ and cut these tracks to shreds. we added home made beats and the classic bass-pounding rhythm of ultravox’s ‘vienna’.