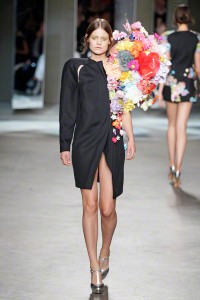 we delivered the sound score to the claes iversen spring summer 2013 show, which officially opened amsterdam fashion week.
we loved the collection, it was all about a new order after the apocalypse. this may sound a bit negative but it was not, the collection had a strong positive message: something beautiful is going to grow out of the remains of an explosion of misery and depression…. and beautiful it was.

the show started with strong simple designs in shades of grey and slowly moved into an explosion of flowers and ended in new constructions which were mind blowing.

we started the show without an intro, actually without music, the sound score came from far away and grew from an erie atmosphere to warmer to complex and ended with a feeling of beauty and relief.
we used music by vangelis (from blade runner), klaus nomi, dj hell, trent reznor, mr. fingers, laurie anderson and added numerous sound effects and subtle rhythms.

we want to specially thank the wonderful miss yoko ono: her original voice recordings of ‘give peace a chance’ were sent to us from new york exclusively for this show.