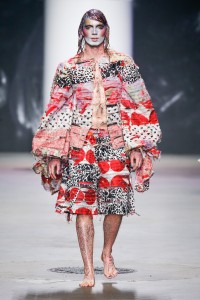 we produced the sound score for the bas kosters fall winter 2015 ‘permanent state of confusion’ show at mercedes benz fashion week amsterdam. the prodigal son from outer space returned home after presenting his outrageous and beautiful collections during london fashion week for a couple of years. he returned with a vengeance.
the collection was all about introspection, guru’s and new ways of finding inner peace in a confusing and hysterical society. the music had to be beyond psychedelic, a slow paced transcendental, serious and confusing trip into the higher state of consciousness of bas kosters. the mix is online. turn on, tune in and drop out.
bas is known for his gender bending colourful and street credible designs, of which the leggings with multiple penis prints made him world famous. this time he took a giant step forward: not one piece was a ready to wear item. all looks were compiled by incredible handcrafted pieces which most probably took hundreds of hours to make. it was hot couture and most pieces will most likely be bought by museums.

a giant pedestal was set in front of a huge lcd screen, on which a video of the designer transforming himself into a sigue sigue sputnik version of the indian god kali was shown during the walk in. he shaved his hair, including his eyebrows… and painted his face and skull in bright colours and added sequins as eyebrows. a human statue sat in lotus position on top of the pedestal, with his back turned to the over excited crowd. hardly anybody knew it was bas himself on that four metre high column. we used a long rant by lsd professor timothy leary while everybody was seated.

while timothy leary preached, the lights dimmed, our sound score started and the human statue started spinning around slowly. tom ford’s darling valentijn de hingh opened the show while nico sang the first few words from ‘all tomorrows parties’. we looped her voice and went completely bonkers. no steady rhythms, no songs, no tracks, no reason, no reality, no logic… an eruption of psychedelic worms squirmed out of the sound system.
we morphed and sampled music by perceptual sound, händel, patti smith, mutsumi, sir alice, guru guru, junkie xl, shylo love, the velvet underground, yazoo, gong, the beatles, connan mockasin, jagit singh, the butthole surfers, 23 skidoo, nico, a duck, ravi shankar, white noise and pierre henry and most probably a few more. we lost the plot.
when the last model left the sacred catwalk, bas descended from his divine pedestal helped by a large group of devotees. they held plates filled with incense and gave out flowers to the audience while bas kosters enlighted people on front row by hugging them. a minute later all the models entered the runway. most of them were men with beyond-outer-space transvestite make up, dolly parton on lsd wigs… a few faces covered by full face penis masks, while other showed flesh covered with 24 karat gold.
needless to say this mind expanding show was an incredible experience. about half of the 1500 people present cried. nobody present will ever forget what happened, nobody will ever understand what they heard and saw. this was one of the most intense and emotional shows we ever did.
to lift up spirits, we played boy georges’ jesus loves you ‘bow down mister’ during the walk out. hare rama hare krishna. blessings to everybody at bas kosters studio, to art director and stylist ruud van der peijl, the choreographers, video artist alex kaseta, accessories magician pavel and all others involved. 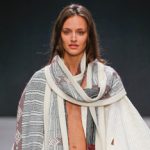 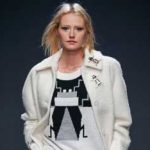